Summary: Billy Kaplan (Wiccan) is half of Marvel's most famous gay couple, along with his boyfriend Hulkling, or Teddy. The character's storylines in Young Avengers mainly center on the teenager's growing control of his reality-warping powers and his prospering relationship with Teddy. Wiccan is destined to become the omnipotent demiurge, one of the most powerful beings in the Marvel universe. Wiccan married Hulkling in August 2020 in the cross-over event Empyre.

Important Issues: Wiccan and boyfriend, Hulkling, accidentally come out to Wiccan's parents while trying to come out as superheroes in Young Avengers #7. 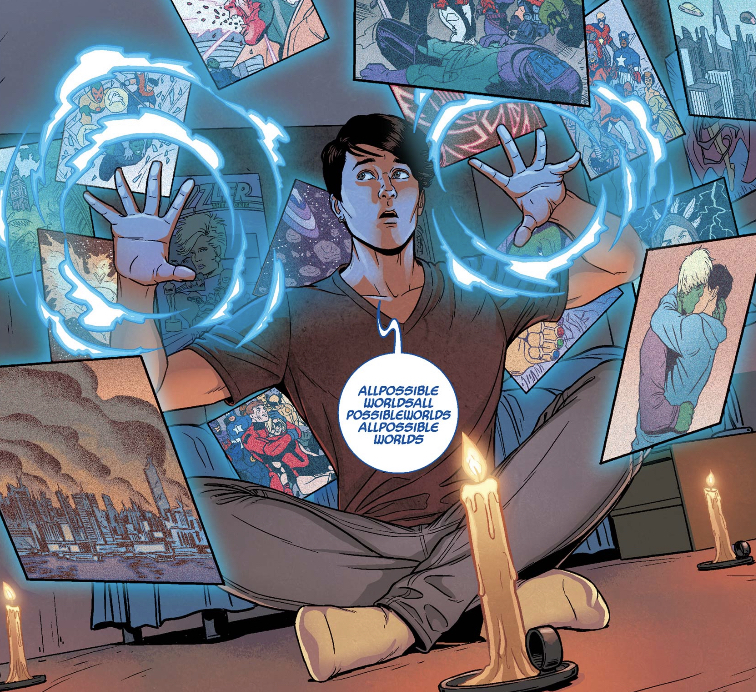 I don’t think we can talk about modern comic book weddings without talking about the way they’re marketed. For the Big Two, superhero weddings mean big PR pushes–most infamously, Marvel and DC both leaked to major newspapers that two heavily-hyped weddings would not be happening, only weeks apart. That big Empyre #4 cliffhanger? The official solicitation for this issue promised a “shock ending,” which, in superhero-speak, usually means something catastrophic like a major character death. Something good happening to our heroes instead is a genuine twist. Though I was initially cynical about a same-sex wedding being sold as a “shock,” Al Ewing’s storytelling is sincere. This is a love story. (Read more)

Teddy Altman and Billy Kaplan - the Young Avengers' Hulkling and Wiccan - shared their first on-panel kiss in Young Avengers: The Children's Crusade #9 this week. It's a big moment for fans of the characters; an awwwww-inducing, infinitely rebloggable image seven years in the making... A lot has changed between Young Avengers #1 and Children's Crusade #9, but it's feasible to surmise that [one] reason this kiss was so long in the making was prejudice - whether it was editors having it or editors fearing it. Both Marvel and its competitors have shown reticence in embracing gay characters in the past.
(Read more)

In a fresh legal twist, a Brazilian court has allowed the evangelical mayor of Rio de Janeiro to confiscate books with LGBT content he considers "inappropriate" for minors, sparking fears over censorship and discrimination. Saturday's ruling suspends an interim injunction which had blocked the mayor from trying to ban a Marvel comic book on sale at the Rio book fair which shows a kiss between two male superheroes. (Read more)