Summary: Although the Rawhide Kid was first created in 1955, he was never portrayed as a gay man until Marvel published the MAX imprint Rawhide Kid: Slap Leather in 2003. This short series was labeled "Parental Advisory Explicit Content" and a large portion of the dialogue was dedicated to innuendos about the Rawhide Kid's sexuality. The Rawhide Kid appeared again in 2010 in Rawhide Kid: The Sensational Seven, but his depiction wasn't made much better. The new series was written by the same author, Ron Zimmerman, and continued to use euphemisms and gay double-entendres for humor's sake.

Important Issues: In 2003, the Rawhide Kid was revealed to be gay in the Rawhide Kid: Slap Leather limited series, which was labeled "Parental Advisory Explicit Content." 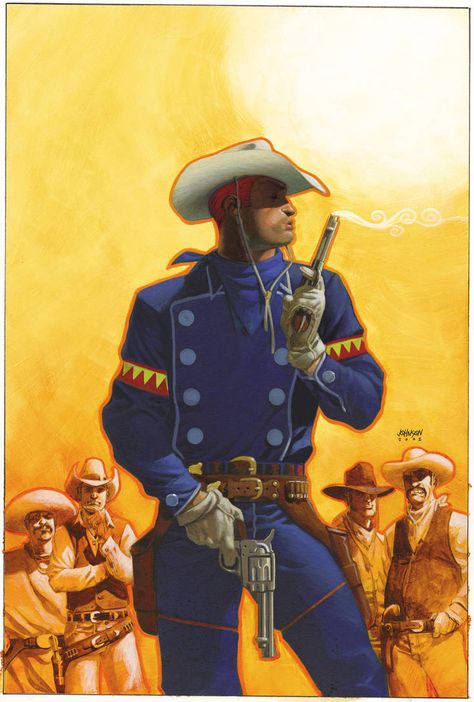 The comic relies on... juxtaposing expectations about heroic comic book masculinity with heavily stereotype-reliant humor about gay men... [and] uses the screen of a gay male character to express misogynistic sentiment (specifically towards the presumably lesbian character Catastrophe Jen). The Rawhide Kid’s homosexuality is a gleefully deliberate anachronism. Every single joke in the comic concerns the Rawhide Kid’s vanity, fashion sense, cleanliness, gym-perfect body, etc. The unkempt western ruffians he encounters are as much in awe with his sense of style and physical perfection as they are with his sharp-shooting skills. (Read more)

Michael A. Johnson, " How much does authorship matter in comedy?" PencilPanelPage, March 9, 2013.

Several years ago, a well-meaning boyfriend gave me a set of the "Rawhide Kid" mini-series published under Marvel's MAX mature readers imprint. The comics were, unfortunately, fairly lousy. They had beautiful art from comics legend John Severin, and a fairly dumb script by Ron Zimmerman that seemed to solely exist to serve up gay double-entendres in the most painful way possible. It's been so long since Zimmerman wrote comics, though, that I thought that maybe it would be worth giving him another chance. And with Howard Chaykin providing the art this time around, well, it would certainly look pretty. (Read more)

Thus, instead of a reproduction of a dominant model of superhero masculinity, I would contend that the Rawhide Kid is a complex and rich character who expresses same–sex sexual attraction and who also inverts and counteracts heteronormative ideologies and instantiates a celebration of queerness through camp and sissyhood. In the first section of this paper, I will explore the character of the Rawhide Kid, particularly how he is constituted through a nexus of heroism, sissyhood, and camp. Then, the paper will explore the Kid's use of verbal camp as a means of both protecting and preserving other characters in the story yet simultaneously overturning heteromasculinist ideologies. This discussion points to the conclusion that camp is the element that blends the sissy and the hero together in this Western comic. (Read more)

Frank Bramlett, "The confluence of heroism, sissyhood, and camp in The Rawhide Kid: Slap Leather," ImageText, 5(1), 2010.