Summary: Also known as Elizabeth "Betsy" Braddock, Psylocke is a mutant telepath who has fought alongside the X-Men, X-Force, and Excalibur. Currently, Psylocke's telepathic power is comparable to that of Professor Xavier. Early in her character's arc, Betsy's body was switched with that of a ninja assassin named Kwannon. For decades, she lived with the knowledge that her consciousness was trapped in another woman's body. However, during the most  recent X-Men run ("Dawn of X"), Betsy regained her original body and began using the name "Captain Britain" as her alias. Writing for Comics Alliance, Andrew Wheeler acknowledges that, "the racial and imperialist implications of Betsy Braddock's transformation from white Englishwoman to Asian ninja are incredibly unfortunate" but notes that "like Nightcrawler she is a powerful example of a character embracing a non-conforming identity, and like Storm or Beast, she shows the strength that can come from reinvention." Canonically bisexual, Psylocke has had relationships with men (e.g. Archangel and Fantomex) and women (e.g., Cluster) throughout her career.

Important Issues: In Uncanny X-Men #251, when the X-Men flee through a magic portal called "Siege Perilous," Psylocke's mind is switched into the body of a Japanese assassin named Kwannon. 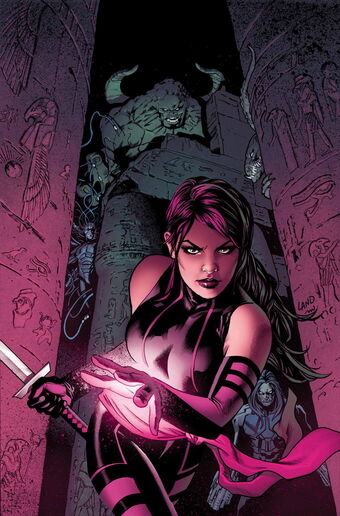 Articles about Psylocke
Post-transformation, Psylocke was finally herself. She's a character who underwent a successful transition to a true identity. Psylocke is not a transgender character -- her transformation had nothing to do with gender -- but like Nightcrawler she is a powerful example of a character embracing a non-conforming identity, and like Storm or Beast, she shows the strength that can come from reinvention. Even despite the awful racial implications of her story, I think Psylocke's new identity should be accepted as truly hers.
(Read more)

Andrew Wheeler, "Freak like me: Understanding the queerness of the X-men," Comics Alliance, June 30, 2014.

When I saw... Psylocke's flirty attitude and tension towards Dazzler – herself an openly mutant icon -, or Dazzler and Rogue enemies-to-close-friends tension… I felt myself there. X-Men taught me how to process those feelings, but it also taught me how to swallow them up: for all the subtextual gay X-Men was, it also was extremely suppressive. They were never girlfriends, never addressed, they never kissed, just always almost so. X-Men was giving me ways of defining my attraction to girls, and in the same breath it was giving me ways to hide it, to subtextually see those gestures as a caring sign of girls’ attraction but never quite tell it apart. Always in the doubt, always subtextual, always repressed. X-Men was my beacon of gay sexuality, but it was, at the same time, my most long-lasting excuse for never facing those feelings in a recognizing and explicit way. (Read more)

Psylocke, Betsy Braddock, introduced in 1976 has over 750 appearances to her name. However, the reveal of her bisexuality took place in 2013 and has not come up since. Even with her popularity, she has appeared in no more than 125 comics since coming out as textually bisexual. Since the X-Force storyline involving her romantic entanglement with a part of Fantomex, named Cluster, that was female has resolved it also hasn’t come up again in any storylines. In fact, her relationship to Angel has been paramount in her stories. This is how bisexual voices are silenced, certainly, Psylocke hasn’t had anything to say on the topic. (Read more)