Summary: Prodigy (David Alleyne) is a mutant with the ability to absorb knowledge and skills from those around him. Although he lost his powers during the events of House of M, Prodigy remained a super-genius as a result of absorbing so much information and perspective over the years. He served as a Young Avenger with Hulkling, Wiccan and America Chavez while dis-empowered and he came out as bisexual near the end of Kieron Gillon's classic run on the title. The young mutant eventually regained his powers through the Krakoan Ressurection protocol in which he had to face Apocalypse in battle. Prodigy is currently a regular character in the X-Factor book that was launched in July 2020 as part of "Dawn of X."

Important Issues: Prodigy comes at as bisexual in Kieron Gillen's Young Avengers (Vol. 2) #9 after kissing a fellow member of the team at the end of issue #8. 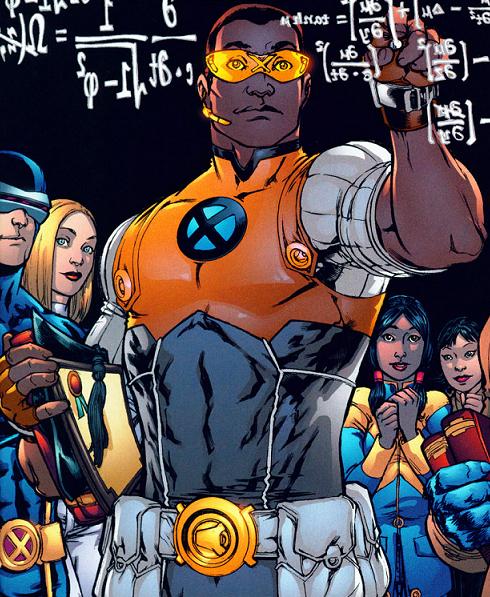 Introduced in Marvel’s New Mutants, David Alleyne is part of the group of new mutants that were introduced before Marvel decided to wipe out all of the mutants except the ones who were the most marketable. (Read more)

Then comes the reveal; where David flatout says “I’m bi.” Recently there’s been a lot of dissatisfaction and controversy over the fact that even the most diverse shows... refuse to outright say that a character is bisexual. There’s lots of hemming and hawing, side steps, and hoops jumped through to avoid simply saying the word. This is incredibly frustrating. So when I read that panel, my heart jumped. David is extremely important to representation. He’s an openly bisexual man of color. I can count the number of openly bisexual characters I know of on one hand. I could extend it to two hands if I include all the characters that are bi, but refuse to acknowledge it within the show, book, or movie of choice. So David just outright saying it? Extremely important. David outright saying it and being a man of color? Be still my queer little heart, I might faint. (Read more)

When I finally discovered that there was such a thing as bisexuality, I was so relieved because now I could explain to my friends what I liked without them questioning me constantly. What I wanted to see now that I had defined myself was representation. I had never had that until David Alleyne came into my life. He called discovering his sexuality ‘an awakening’ and that ‘it was like realizing something was always true’ and that was exactly how I felt as well. It was so great to finally be represented and have someone I could relate too. (Read more)