Summary: The first proud, out gay character in Marvel's history, Northstar paved the way for future LGBTQ+ characters to be introduced. Although his debut series, Alpha Flight, was not extremely popular, the issue in which Northstar came out flew off of the shelves, leaving comic book stores across the country sold out of the title. Later, Northstar would go on to marry his longtime boyfriend, Kyle Jinadu, in Marvel's first depiction of gay marriage.

Important Issues: Northstar comes out in Alpha Flight #106, exclaiming "I am gay!" whilst doing battle with Major Mapleleaf. 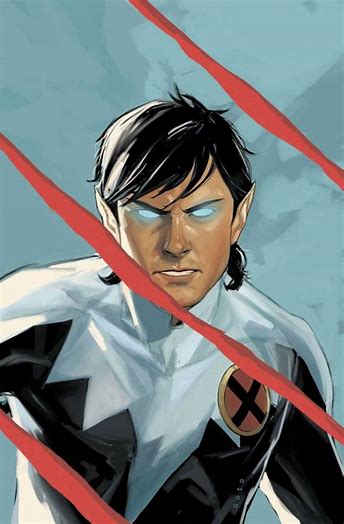 After nearly a decade of battling evil around the globe, the comic book hero Northstar has revealed to the 100,000 or so people who follow his exploits that he is gay... He reveals his sexual orientation in a story about his adoption of an AIDS-infected baby. The second-largest company, DC Comics, has also introduced a gay character and AIDS-related themes in the "Flash" series. That's welcome news. The comic audience is made up mainly of teenagers, the group that will benefit most from discussions about sexuality and disease prevention. And the new story lines suggest that gay Americans are gradually being accepted in mainstream popular culture. (Read more)

Back in 1992, Marvel Comics made headlines by revealing that Northstar, a Canadian superhero associated with Alpha Flight and the X-Men, was gay. Twenty years later, the character is back in the news as he is set to wed his longtime partner Kyle in Astonishing X-Men #51, in stores on June 20th. (Read more)

At the time [when Northstar came out], X-Men comics were already a hotbed for queer subtext. Comics scholar Ramzi Fawaz notes that Claremont’s X-Men “articulated mutation to the radical critiques of identity promulgated by the cultures of women’s and gay liberation.” Another comics scholar, Scott Bukatman, puts it more simply and says: “mutant bodies are explicitly analogized to … gay bodies” in Claremont’s X-Men. It is no surprise then, that Marvel’s first gay superhero should emerge from this series. (Read more)