Summary: Brian K. Vaughan's critically-acclaimed series Runaways begins with a bold premise: What would do if you woke up one day and discovered that your parents and their dorky friends are actually super-villains? The six teenagers who lead this ensemble book do what most of us might do in a similar situation: they connect with each other, run away from their families, and do their best to disrupt their parents' evil plans. Their team includes Alex Wilder (a hacker), Molly Hayes (a mutant gifted with Herculean strength), Gertrude Yorkes (an acerbic feminist with a telepathically-bonded dinosaur), Chase Stein (an engineer and a bit of a jock), Karolina Dean (an alien), and Nico Minoru (a powerful witch with a penchant for goth fashion). After the group is betrayed by one of their founding members, Nico becomes the group's leader. An important step forward in comic book representation, this is the first mainstream American superhero team to be led by a young Japanese woman who also happens to be bisexual. Although Nico has dated several likable men and women over the years, her relationship with Karolina Dean is particularly significant. The first inkling of this can be seen in Runaways #7 (Volume 1, #7, 2005) when Karolina works up the courage to kiss her best friend, only for Nico to reject her advances. As the series continues, Nico and Karolina attempt to deny their feelings but the fact that they carry a torch for each other is as obvious to their teammates as it is to their faithful readers. Happily, the newest creative team (Rainbow Rowell and Kris Anka) decided to set things right 13 years after Karolina and Nico's tragic first kiss. In Runaways #12 (Volume 3, #12, 2018), the couple finally get together.

Important Issues: It is revealed that Nico is bisexual in Brian K. Vaughan's Runaways (Vol. 2) #7, when she shares a kiss with fellow Runaway, Karolina Dean. 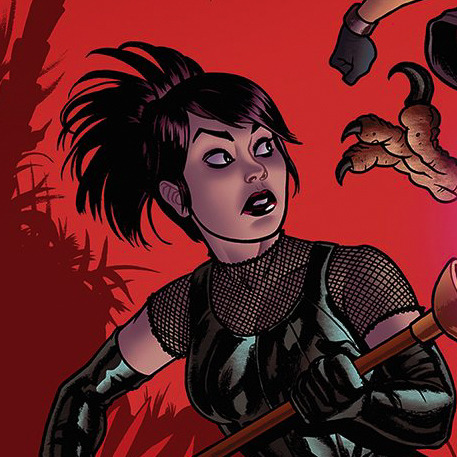 While the 2005 comic missed an opportunity to present a functioning LGBT relationship all those years ago, the time in between has allowed the two characters to grow. Nico rejected Karolina largely because she was still a teen dealing with: the fate of her supervillain parents, her own magical prowess and the fact that she was still figuring out who she wanted to be. Karolina also had time to explore her own sexuality, as was the case with her relationship with Julie Power, and her confidence has only been emboldened by that journey. Thankfully, all these years later, Karolina and Nico’s do-over gets the room to breathe it deserves, with multiple, gorgeous panels celebrating their long-overdue commitment to each other. The dialogue is also spot on, in that it makes clear that both parties are undoubtedly excited about their new, young love. There’s no turning back this time. Marvel Comics has a new power couple, and certainly there’s nothing that could stand in their way. Right?"   (Read more)

Nico might be one of my favourite characters in Runaways, and really all of comic books, but she is also part of a group. What made the dynamics of this band of adventurers more refreshing and appealing to me, was the diversity. Nico herself is Asian-American, Alex is black, many of the other characters are white, but through Karolina we get an exploration of sexuality; she is a lesbian, and in later runs of the comics, we get a latinx character in Victor Mancha and a form of trans/non-binary representation in Xavin, an alien shapeshifter. (Read more)