Summary: Monsieur Mallah is a gay supervillain in DC comics who also happens to be an ape. Mallah, a highly intelligent gorilla and a charter member of the Brotherhood of Evil, was created by his lover, the Brain. The villainous couple are members of the "rogue's gallery" for a number of superhero teams, including the Doom Patrol and the Teen Titans. They continue to terrorize humanity while in a loving relationship. 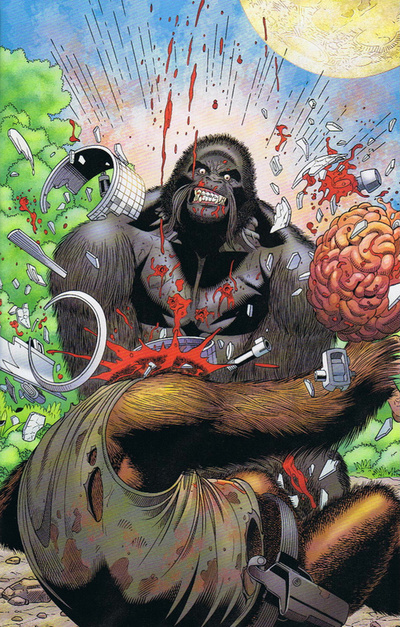 Death is an overused plot device in comics and Monsieur Mallah and the Brain die a storyline that has all the marks of reducing the number of gorilla supervillains and displaying how hardcore villains really are. No, this killing has a nasty resonance, what with Grodd taunting a pleading Brain while using him to bludgeon a pleading Mallah to death. Grodd might murder Monsieur Mallah for being an “abomination”–meaning perhaps an ape who fraternizes with humans or an ape who’s been experimented on by humans. But it doesn’t matter all that much because there’s another reason someone would shout “Abomination!” while killing lovers and it’s one that knocks the narrative out of the world of fictional hates and fictional prejudices into the real hate crimes of this one. Their murder looks like one kind of hate crime badly disguised as another, and that resonance doesn’t seem contained or under control at all. (Read more)

Doom Patrol #34 was published in 1990, and it’s certainly tempting to reread the story in a sympathetic light - after all, the idea of a snickering gay joke right in the middle of one of the most seminal runs of proto-Vertigo DC seems quite distasteful. But even the most somber, morbid, and misguided treatment of trans people in Sandman [for example, Echo and Wanda] never quite got around to laughing at them. Whatever the original context was supposed to have been, I saw lots of jokes around Monsieur Mallah and the Brain in Wizard magazine over the next decade - and don’t think the context was Pride Month. In 1990 there weren’t a lot of queer characters in comics, any kind of comics, but there was Doom Patrol #34, a joke on its face that people just learned to accept as the years and decades rolled by. (Read more)

During Grant Morrison’s 80s run of the DOOM PATROL, the Brain was put into one of the spare robot bodies belonging to Doom Patrol member ROBOTMAN and the fun began.  As soon as he had arms and legs (and other body parts), Brain tells Mallah that he has been secretly in cross-species love with the furry beastie for years, but couldn’t confess it when he was just squishy lumps of tube stuff... The Robotman body self destructs the moment the monkey plants a smacker on the android’s lips, as it simply can’t exist in a world that odd. It sure brought home the idea that homosexuals are JUST like you and me. A great leap forward for tolerance. (NOTE: The characters have since been revived and killed again, this time Mallah being beaten to death with Brain as the weapon. They always die together, though…so it’s KINDA romantic.) (Read more)