Summary: An important bisexual character in the Hulk books, Marlo Chandler-Jones is described by Comic Vine as "the wife of Rick Jones and former lover to both the Hulk and the Moondragon." Marlo is a longstanding character in the Hulk franchise, and she dates the Hulk when he is manifesting his Mr. Fixit personality. After her relationship with Hulk ends, Marlo falls in love with Rick Jones, eventually marrying him. However, several years later, Marlo falls in love with Moondragon and the two women share one of the first same-sex kisses in comics (Captain Marvel, Volume 3, Issue #32, 2002). This relationship ends when Marlo decides to return to Jones, prompting Moondragon to falsely conclude that she has been psychically manipulating Marlo into having feelings for her and suggests that she may not bisexual at all.

Important Issues: Marlo and Moondragon share one of the first same-sex kisses in Marvel in Peter David's Captain Marvel #32. 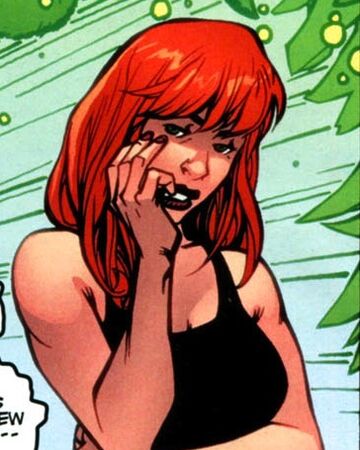 Eventually, Marlo confessed to Rick her attraction to Moondragon. Marlo said that she didn’t believe she was gay, but that she felt an attraction to Moondragon that she couldn’t deny and needed to explore. Rick reluctantly agreed to let her go, and said he’d be waiting for her when and if she changed her mind. Marlo and Moondragon spent a few months living happily together, but eventually Marlo started to miss Rick and had her old feelings for him start to come back. Moondragon understood, and although they broke up, they agreed to remain friends. When Marlo finally did return to Rick, Moondragon told them both that Marlo’s attraction to her was artificial, an accidental effect of her telepathic powers being affected by a supervillain called the Magus. This, however, was a lie that Moondragon came up with in order to allow Marlo and Rick to resume their relationship, without doubt hanging over their heads about Marlo’s feelings for Moondragon. Whether or not Marlo believed this story is unknown. (Read more)