Summary: One of the few transgender comic characters to be created by a transgender writer (Rachel Pollack), Kate Godwin's name is an allusion to the pioneering work of Kate Bornstein and the activist Chelsae Goodwin. Sadly, it is difficult for contemporary fans to track down trade paperbacks with Kate Godwin because they do not exist. As Jude DeLuca explains in a piece for Comicosity, "If you’ve been paying attention to the Doom Patrol in the past two decades, you might notice a key oversight. That is, how transgender author Rachel Pollack’s time as their writer has been largely ignored by DC’s marketing and editorial teams. Even John Arcudi’s run and John Byrne’s critically lambasted run (which even received its own omnibus) have received more acknowledgment from the creative teams who came after than Pollack’s era does. So far, the one attempt to collect Pollack’s Doom Patrol issues in trade format was cancelled" 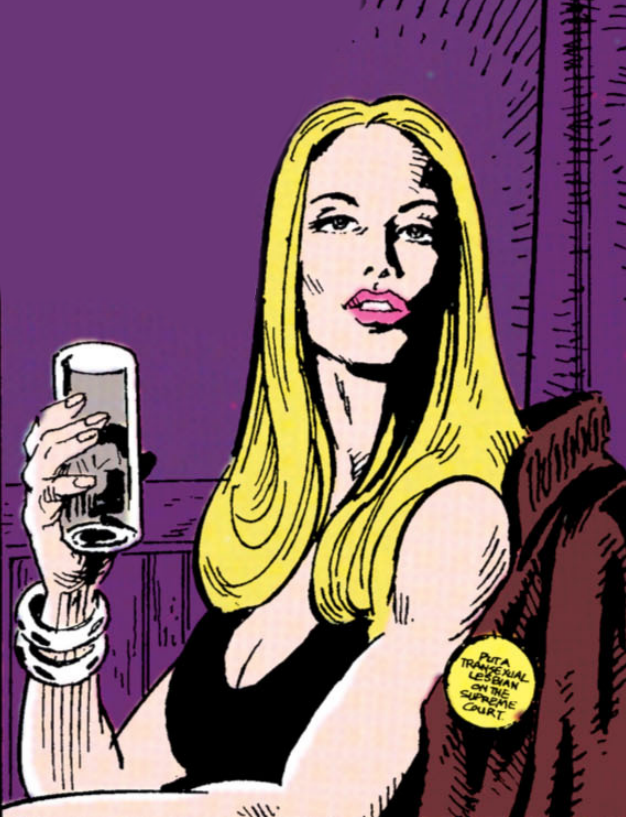 Rachel Pollack was able to use the character of Coagula to discuss trans issues and to inform readers who were unaware of these issues as to what it means to be trans. She even crafts a brilliant moment in storytelling where a transcendent being requires the strongest example of a man and a woman, and Robotman and Coagula are the man and woman the best personify those genders, driving home the fact that a trans woman is a woman. Period. (Read more)

Coagula’s comic book existence is relatively obscure, appearing a mere handful of times in the nine years she was active, but she is nonetheless a noteworthy part of DC’s mythology; in addition to being openly gay, she is one of the first transgender characters in comics. And though those two elements are significant in their own right, what makes Coagula such an important and dynamic character is how her mythology explores and exposes the fluid nature of identity. (Read more)

Rachel Pollack introduced the heroine Kate Goodwin, AKA Coagula, one of the first trans characters in comics. Coming across an issue in a Winnipeg used record store helped me see my own history: a trans woman myself. (Read more)

Annie Mok, "A superhero on your own terms: An interview with Rachel Pollack," The Nib, September 13, 2019.