Summary: Joey was a minor character that appeared in four issues of the Watchmen series. She was featured in issue 11, in which she and her girlfriend, Aline, argue in the street about their relationship before being killed by an alien monster. Joey is portrayed as a stereotypical "butch" lesbian and ridicules Aline for supporting gay causes. This series was published during the period that the Comic Code Authority (CCA) prohibited the depiction of “illicit sex relations,” “sex perversion,” and stories undermining the “sanctity of marriage," making this depiction ahead of its time but not unproblematic.

Important Issues: In Watchmen #11, Joey and her girlfriend, Aline, argue on a street corner about their relationship shortly before dying 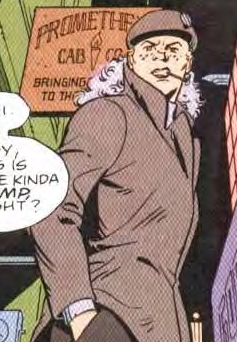 The remarkable thing about the couple Joey and Aline is that they embody everything that traditional comic book readers are likely to find objectionable in women: loud, assertive, opinionated, and so butch-looking that people call them “fella[s]”. Joey especially is rude, bossy, prone to violent outbursts, and even physically assaults Aline in public. Yet, by taking an interest in these women and depicting them against the “Hiroshima lovers” shadow in the context of Adrian’s alien attack, Moore rewrote the comic book assumption that such people are unimportant and have no rights to exist. Their deaths are a reminder that every life is a “thermodynamic miracle” and an indictment of the type of heroic ego that would justify mass murder as a master plan. (Read more)