Summary: The first appearance of Extraño, literally translating to "strange" in Spanish, was a harmful representation of gay characters due to his depiction as an flamboyant, suicidal, and feminine man. He would go on to presumably die of HIV after battling a villain called the Hemo-Goblin. DC Comics revived the character in 2016 for the Midnighter and Apollo series, in which they resolved the problematic depiction of the magician. Extraño is currently married to Hugh Dawkins (the Tasmanian Devil) and the couple have a daughter named Suri.

Important Issues: While Extraño was portrayed as a flamboyant, gay man in The New Guardians in 1988, his sexuality was never discussed until he spoke about his husband in Midnigher and Apollo #1. 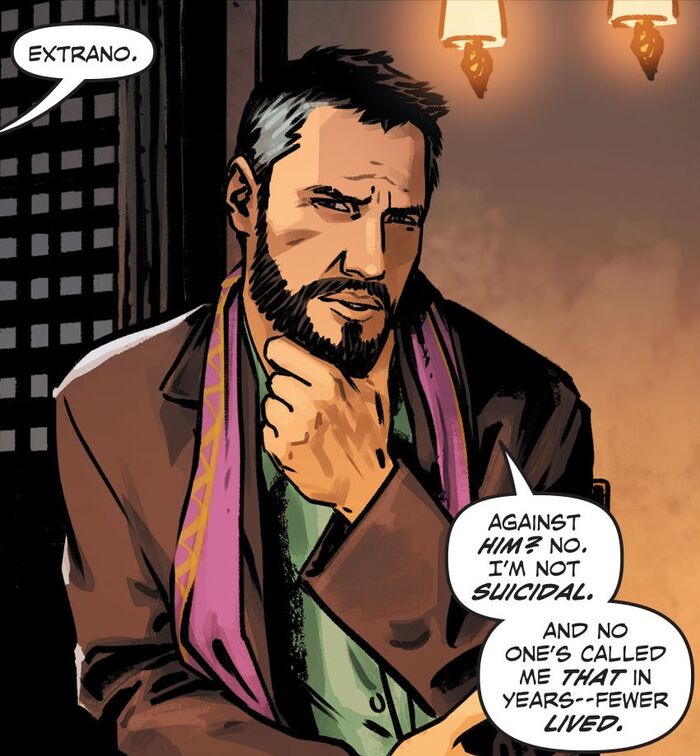 A more welcome remake happened recently in the pages of Midnighter & Apollo, from DC Comics, written by Steve Orlando, who is bisexual. Mr. Orlando reintroduced Extrano, a suicidal H.I.V.-positive gay man named Gregorio, who debuted in 1988. Gregorio now shuns his Extrano persona and is more confident. "With a book like Midnighter & Apollo, which from cover to cover is a love letter to queer characters and our struggle to live, be visible and love, it felt right to return to one of the first and reintroduce Gregorio to a new generation," Mr. Orlando said. (Read more)

Created by writer Steve Englehart and artist Joe Staton, Extraño was very open about his queer identity. He tended to dress and speak in an overtly flamboyant manner, insisting all the while that his team members call him “Auntie.” But then, subtlety didn’t really play much of a role in ‘New Guardians,’ especially when it attempted to address the social issues of the 1980s. After all, this was a series which included a villain named Snowflame who gained powers through snorting cocaine — and another who gleefully spread HIV, and called himself the “Hemo-Goblin.” Though well-meaning and intended to reflect a more modern world, ‘New Guardians’ was a series which may have stood to benefit from some sensitivity training. (Read more)

You see, this magician wasn’t just gay, he was really gay. And the writers made sure we all knew he was really gay — without ever actually, you know, saying it. The CCA had lost some sway, but they didn’t drop their ban on LGBT content until 1989. Within the first few panels of The New Guardians, he made clear he would not be fathering children. After all, he was gay. He referred to himself as “Auntie,” called his teammates things like “my darling ones,” wore over-sized earrings, packed on the jewelry, dressed in long, flowing, flamboyantly gay clothes, heck even the way they drew him just screamed “GAY!” (Read more)

Curtis Harding, "Who was the first openly gay superhero? In defense of DC comics' Extrano," The Deep Geek, June 25, 2019.