Summary: While Selina first appears as an enemy belonging to Batman's rogues gallery, she has since become an antihero with a complicated romantic relationship with the Dark Knight himself. She kisses fellow Catwoman Eiko Hasigaway in Judd Winnick's Catwoman series. However, the character has recently committed to a long term relationship with Gotham's caped crusader. 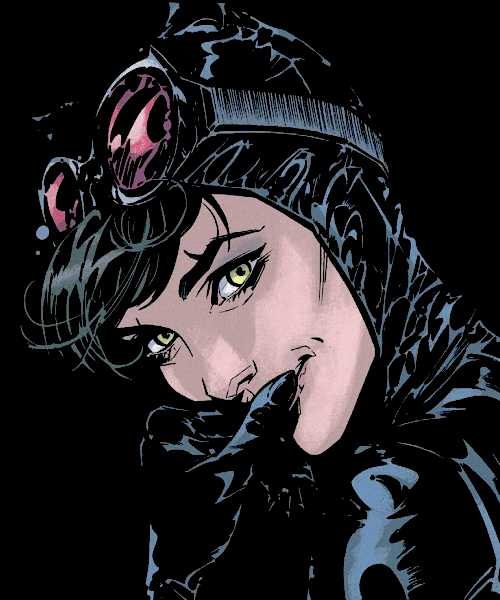 Catwoman #39 was released yesterday and confirmed what many fans have guessed over the years about everyone’s favorite cat burglar. (Read more)

Catwoman is a fascinating case study. For the bulk of her career she’s been a supporting character, and as a villain she was always an outsider in the superhero genre. As such, she’s a prime target for marginalization and mistreatment, but also for creative attempts at reinvention. She also serves as a unique lens through which we can see how the role of female characters has evolved over the years across various forms of media. (Read more)

In the fifth chapter of Valentine’s magnum opus, fans were faced with a moment that for some, confirmed something they had always believed, and for others, was a shock to the system. With a single kiss shared between Selina Kyle and her erstwhile replacement Eiko Hasigawa, Catwoman was revealed to be bisexual a fact then discussed both in an interview with Comicosity and on Valentine’s own blog. To say this development pleased me would be an understatement. And not just the kiss, of course, but the readiness to acknowledge an iconic woman’s queer sexuality in canon had a profound effect on me... And yet I bristle at queerness needing to be confirmed through oral declaration or “proof of life” as I like to now call it — a kiss or other more graphic sexual activity between two people of the same gender identification. For a long time, these two factors were all I could accept in terms of passing the test of queerness. Once one of those factors arose, I was sold — unless of course (as was the case with Marvel’s Angela), a meta-textual push back into the closet occurred. (Read more)