Summary: Catman was originally created as a supervillain for Batman but has since gone on to become an antihero and the leader of the Secret Six. Blake acts as a donor for the polyamorous Knockout, Scandal Savage, and Liana in order for them to have a child in Gail Simone's Sinister Six series. As Simone continues to write the character, his sexuality will continue to be explored.

Important Issues: Catman is confirmed bisexual in Gail Simone's Secret Six #1, when he is seen flirting with both a man and a woman 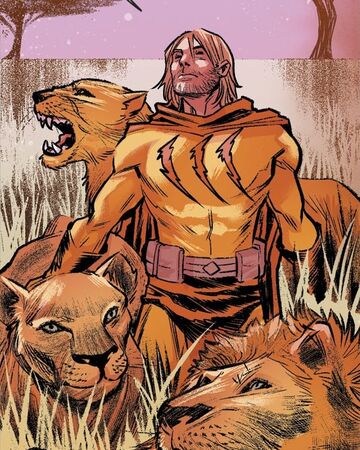 In the countdown to the End of Super Gay!, Johnny shares his obsession with C-list anti-villain Catman. A nemesis of Batman and avid fan of Catwoman, who first appeared in Gotham in the early 1960s, Catman’s reimagining as a traumatized, recovered and now (kinda) out-bisexual non-hero was masterminded by Gail Simone, in the series’ "Villains United" and "Secret Six," from DC Comics in the 2000’s. Find out why Johnny identifies with this disaffected rich kid ne’er-do-well who dresses up like a giant ginger housecat. (Read more)

Catman creator Gail Simone says, "I think it’s important to have diversity in comics for a thousand reasons, it’s not just some airy conceptual thing, it’s important to reflect the humanity of the readership. It’s irksome to me on every level that some of the most loyal and vocal comics fans get so little representation in the actual characters on the page. They might have a token best friend or something, but it’s rare to see kickass characters who lead a book who are also LGBTQ, just as one example. It’s not liberal guilt, it’s just facing reality after years of pretending that the audience is all one kind of person. Most of the big name characters in comics were created decades ago, but a lot of the readers weren’t, and it’s time that we addressed that, it’s important not just for the blue sky right and wrong of it, but also because for comics to be vital and modern and humane, we have to look past this very insular world that’s been created on the pages." (Read more)